Summer holiday post time! This year, Tim and I had a similar concept for our holiday as last year – three countries by train, though this year we started the journey by flying to Valencia. I’ll keep the posts separate for each three places in case you’re interested in reading just one of them. We spent four nights in Valencia, four nights in Montpellier and two nights in Geneva.
See also: Mooching around Montpellier and Gallivanting around Geneva.

After a pretty smooth flight, bar the annoying wait at the airport in Frankfurt for no apparent reason, the trip to the hotel also went pretty smoothly. We stayed at Hotel Valencia Center which was pretty posh for our standards! But hey, you gotta treat yourself every now and then, right?! I can definitely recommend the hotel though – the breakfast was great and the staff were really friendly, just it was a little on the outskirts of the city which wasn’t the end of the world, but you noticed it after a few days when coming back after having food in the centre. Anyway, after having arrived so late, we went out for some food after hitting the hay pretty quickly after.

The first day saw us head towards the City of Arts and Sciences (Ciudad de las Artes y las Ciencias) which is an extremely modern area. We only had a walk around and didn’t go inside anywhere, but by the looks of things it was a museum-like area, also with the possibility to go on boats and other things on the water. It reminded me a little bit of The Capitol in Hunger Games!

Afterwards, we had a wander through a park towards the old town. We walked aimlessly around, not really knowing where the good and interesting places were, and then we finally met with an old uni friend of mine, Elsa, who is originally from Valencia. She knew what to show us! She took us to have some Valencian horchata which is, if I’m not mistaken, milk made from tiger nuts, at least in Valencia. It was a weird taste to start with but actually turned out pretty tasty. We also saw Europe’s narrowest building and had a quick look around the old silk exchange. We finished off the evening with tapas and drinks before calling it a night. 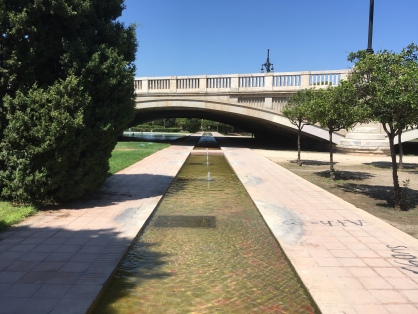 A walk through the Tramo del Palau.

Mooching around the city. 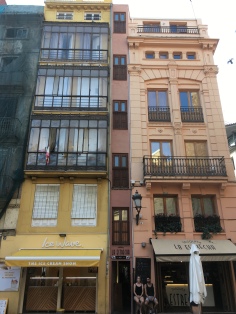 The small Horchateria where we had our tiger nut milk.

We took things a little easier the next day, with a trip to the city beach (which was heaving, of course, meaning we just walked up and down the beach and didn’t sit down and chill). In fact, we didn’t really do much at all apart from have a long walk around! In the evening, we went into the city to find a place to have food. After not really finding anywhere decent, we accidentally stumbled across the same place we’d been the night before with Elsa. With it being so good and there being a lot of different tapas to choose from, we decided to just go there again and order different tapas. The place is called Bar El Kiosko and really isn’t anything posh. It isn’t that expensive, but the food is delicious and served quickly. It’s on a small square where buskers come and play a few songs and the move on, offering a nice atmosphere. So check it out if you’re heading to Valencia! 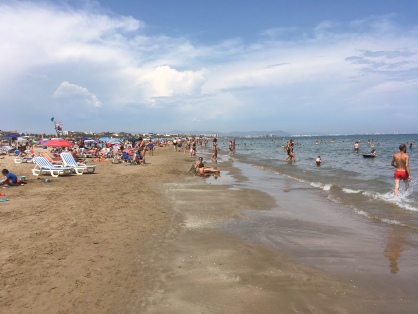 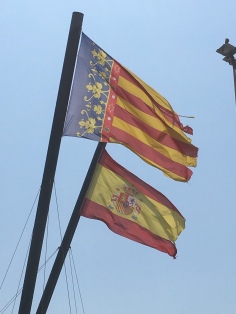 The Valencian and Spanish flag

On our final full day in Spain, we left the hotel pretty early and had a walk around the city (and I bought stamps for postcards all in Spanish which was a very exciting moment), and we had a look in the Central Market where I treated myself to another horchata. Then we headed to the train station for the train to Cullera where Elsa was staying. Cullera is a smaller city about 30 minutes away from Valencia by train. The beach was a lot quieter there, though it was a hell of a lot windier (proving good fun with the waves in the sea!). We had lunch (tasty fish and salad, followed by ice cream and figs fresh from a fig tree) and then went to the beach for a few hours. After playing in the sea with the waves for a few hours and then sunbathing for about half an hour and getting covered in sand due to the wind, we headed back and took Elsa’s dog for a walk. We walked up a mountain and got a damn good view of Cullera!

View from above of Cullera

It was then unfortunately time to say goodbye and head back to Valencia. Our train to Montpellier via Barcelona the next day was really early, so it was an early night for us and early rise ready for the second part of our adventure in Montpellier!

Valencia was definitely the highlight of the holiday of all three places we went to. The city was full of life and we could have easily spent a few more days there. So Valencia is definitely on my list of places to visit again!

This site uses Akismet to reduce spam. Learn how your comment data is processed.