I genuinely couldn’t think of a better pun for the title, so you’re going to have to cope with that old one. Sorry. But yes – another year, another city checked off the list. Along with Anna, who I went to Prague with last year, last week I headed to Budapest to see what the capital of Hungary had in store for two excited tourists like ourselves.

We were there from Thursday to Monday and that was definitely enough time to see everything if you’re not too bothered about seeing all the museums and going inside other buildings. We stayed in an apartment with All In Apartments – we had the Forest Apartment (which we didn’t pick, I guess we were just automatically assigned to us). We booked on Booking.com. The price was fantastic for what it was – a small apartment right in the centre and just a few minutes walk away from an array of bars and restaurants. From the airport, it’s a direct 30-minute bus journey, then a maximum 5-minute walk to the apartment from one of the central bus stops.

We were met at the apartment by one of the staff, also an Anna, late on Thursday evening, and were given a map and were told all the places we should check out during our stay. As we had arrived quite late, we went to the nearest Tesco, got some beers, headed back, drank, and hit the hay ready to get up early the next day.

Now, we really didn’t have any plans whatsoever during our Budapest stay. We were just going to play it by ear, with a few recommendations that Anna had received from friends. On Friday, we decided to just walk around and see what we could find. After a small walk around the city, we decided to take the underground out towards Heroes’ Square. The area itself was quite pretty, but after a half-hour walk around the park, we realised it clearly wasn’t a buzzing area as we thought it might be, and so slowly but surely we made our way back to the city centre. 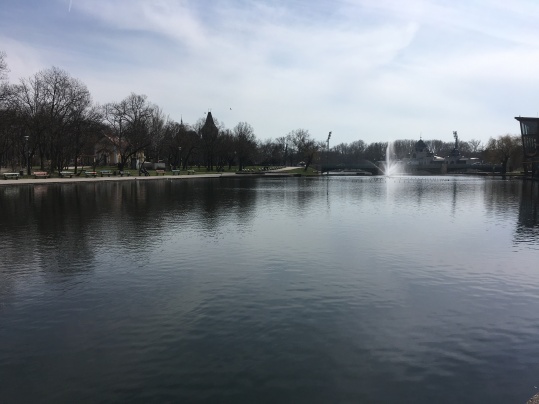 The Városligeti-tó; a small lake on the outskirts of the city.

After another stroll in a different direction, via an Easter market which had the most delicious looking food, so we treated ourselves to a kind of pork sandwich, we had a look inside St. Stephen’s Basilica which was truly spectacular both inside and out. 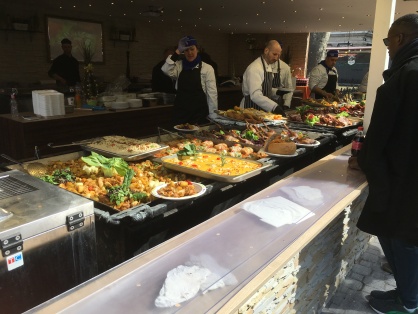 One of the many stands at the Easter market.

With tiredness kicking in, we headed back for a nap, ready to go for some drinks and then some dinner. We came across a place called “Karaván” which was basically an outside area with a load of food and drink trucks; from vegan burgers to chips and other meat things, as well as beer and cake! We had a beer, then made our way to a restaurant we wanted to tried out.

“Not to worry!”, we think, heading to another recommendation on Anna’s list.

After a small panic, we ended up going down the huge tourist-y street that we swore to avoid. Sure enough, we got a table. Anna decided to panic and fall for the trap of ordering “typical Hungarian Schnapps that’s good for the stomach before your meal” whilst I had popped to the toilet. It was extremely strong, let’s put it like that. We had some “typical” Hungarian food, but then again it wasn’t exactly the most authentic of restaurants. But it was tasty nonetheless. Then we headed to the ruin bar, Szimpla Kert, which was szimplay amazing! (Sorry.) But it really was. It’s basically a huge ruin that has been turned into a bar – two, maybe three floors. It was huge! And it felt more like a club with such loud music and a bar every 30 steps you took. That’s when I learnt that ruin bars are quite typical of Budapest – another thing to add to the list to check out more of! After a few drinks, tiredness got the best of us and we headed home to sleep.

Saturday saw us, hangover included (I was definitely worse than Anna), go to the other side of the river, via the Great Market Hall. The market hall wasn’t exactly the most exciting thing – it’s more for people who actually live in Budapest and can get some food to cook later. Anyway, we then went on to the other side of the river to see the Liberty Statue which is dedicated to those who lost their lives fighting for independence, freedom and prosperity of Hungary. After the steep climb and seeing the statue up close, we decided to head back across the river back to the Easter market from the day before to try some more food out. This time round we had goulash in a huge bread bowl. Yum! 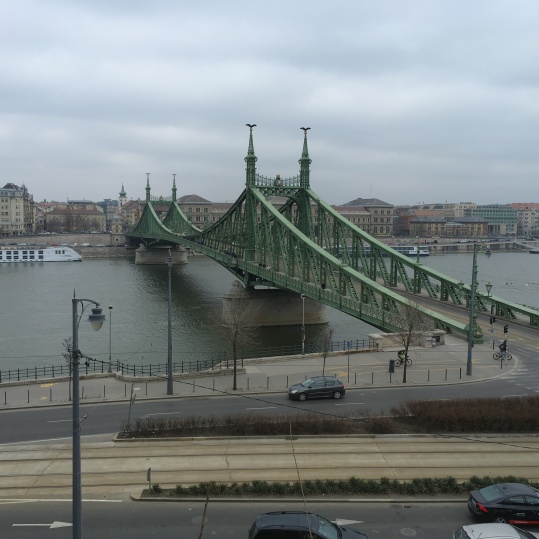 A view from above.

A view from above. 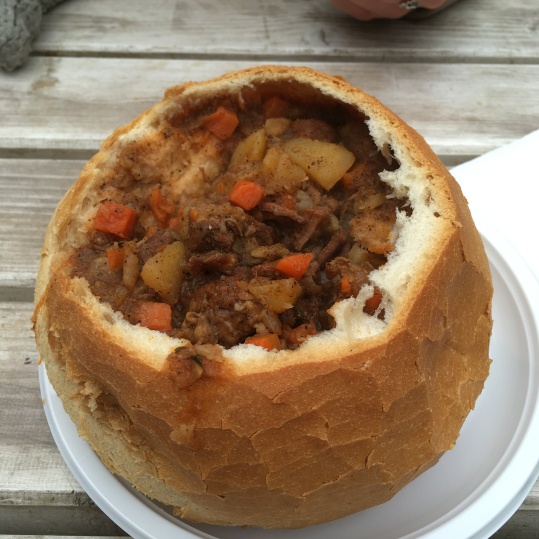 Then it was time to check out Castle Hill which, believe it or not, has a castle on top! We walked towards the other side of the river via the famous Chain Bridge because Castle Hill, like the Liberty Statue, is on the other side of the river, the Buda side (we lived on the Pest side – I didn’t realise there were literally two parts called Buda and Pest!). After walking around the castle (hangovers starting to wear off at this point thankfully), we headed towards the central area of Buda where we came across the Matthias Church. I really liked the roof! 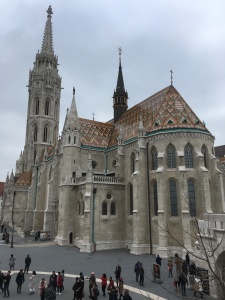 Later on, we went back home (via a restaurant for coffee and cake), rested, then did a repeat of the night before – this time we headed first to another ruin bar for a drink, and, this time having reserved a table (how clever we are!) we went to M Restaurant. If I had to recommend just one place in Budapest (apart from sightseeing stuff), it would be this restaurant. We were greeted with the hugest and friendliest smile you have ever seen, and the food was absolutely delicious. Usually, you can actually draw on paper spread out on the tables, but we were apparently not good enough for a table like that. Though we were disappointed at first, we got used to our little corner in a cove. For starters, we shared a meat platter and “sweetbread” (I didn’t know what it is and I’m kinda glad Anna told me what it is after I ate it. I’ll let you Google it yourselves. Little innocent me was expecting, well, bread that was sweet.) And for mains, we had (I say “we” because we pretty much shared everything) chicken paprikash and spare ribs. Delicious! To finish off the evening, I went for a dessert, after Anna said she couldn’t possibly eat another bite. She soon changed her mind when my hot-and-runny-in-the-middle chocolate cake with cold caramel on biscuit crumbs came along. My God, it was good.

Then came Sunday; our last full day. Anna wanted to check out some café that was voted the most beautiful café in the world a few years ago. Naive me went along with her, to then come across the most poshest café/restaurant you’ve seen. It was the New York Café. There was a live orchestra and everything. I felt like I stuck out like a sore thumb! But, the food was nice, and, though expensive for Budapest, actually not that expensive in general, and the portion sizes weren’t that bad at all.

To get over the shock from the poshness, we went to the market for lunch (we’re talking a stroll of a couple of hours here, taking a non-direct route to the market). Lunch number three was langosch with cheese and cream – yum! We had decided the day before that we should actually do one of the Free Walking Tours on offer, like we did in Prague, and we instantly regretted not having done it sooner. First hint from the tour guide: not to buy food from the Easter market because it’s overly priced and a tourist trap. Whoops. Never mind – it was still tasty and not ridiculously expensive for us two Frankfurter and Londoner. The tour itself was great and I can only recommend it. We learnt a lot of interesting things and our tour guide, who’s nickname was Hodor, was really funny and informative.

After a nap back at the apartment, we headed out for one last dinner – and this time we decided to keep things simple and go back to the Karaván place and get some vegan burgers which were delicious, as usual with the food in Budapest. We had a few beers, went back to the ruin bar we had been to on the first day, and then called it a night (finishing off our beers from Tesco on Thursday in our apartment).

Monday was short but sweet, with us flying back in the afternoon. We went to the “anna café” again (which we’d stopped off at over the weekend for a drink and snack). I had a “typical Hungarian breakfast”. I don’t know how typical it was, but it was still tasty. After a walk along the river, we went back to the apartment, got our things, then headed to the bus stop to go to the airport. And that was that!

So, in short, I would say that the first thing that comes to mind when asked about what I enjoyed about Budapest – it has a really good nightlife. There were so many bars we walked past thinking “that looks cool!” that we never then had time to check out. It definitely feels like a much bigger city than Prague (which it is), as Prague felt that little bit calmer. Budapest doesn’t “feel” that pretty, either, though there are some really nice buildings dotted around. Perhaps it had something to do with the weather (Prague was in May and nice and warm, Budapest was March and chuffing cold!), but nevertheless, Budapest had its nice spots and I would certainly go again to try out some more of the restaurants, bars and cafés that we unfortunately didn’t have time for this time round.

One thing we also noticed was how everything wasn’t exactly as cheap as we thought it was going be. It wasn’t expensive at all (cheapest were drinks – around 2.10 EUR for a beer) but food was actually quite “normally” priced. Not that it was a problem! It was just that we had heard about it being so cheap. In total I took 300 EUR worth of forint and I brought back around 90 EUR; so that’s three full days and two half days. Not really that bad at the end of the day.

1 thought on “Hung(a)ry in Budapest”

This site uses Akismet to reduce spam. Learn how your comment data is processed.